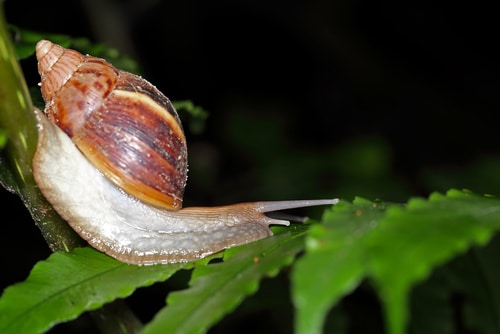 Giant African land snails are an unusual but fascinating pet – especially if you fancy one that isn?t super high-maintenance and doesn?t require a lot of handling. Growing up to 20cm long, it?s a whopper that dwarves the average garden snail. Although it doesn?t require tons of care, that doesn?t mean that you don?t need to care for it at all. All pets will require a certain degree of work to make sure that they?re healthy and thriving.

You will want a large terrarium that is also securely fitted with a lid that won?t budge and allow the newest member of your family to escape! Shoot for glass or aquarium acrylic, but make sure that the snail will have enough space to move and also a lid that allows for good ventilation.

The next step is to provide a good substrate for your snail, as this will allow it to burrow and feel comfortable. If you?re keeping more than one snail, you might also expect little snail babies as they?re hermaphrodites and can breed easily. Check with your pet supplier for coir, a fibre made from coconut husks, or sterilised topsoil, which ensures that you don?t get unwanted bacteria or other creepy crawlies locked in with your pet.

Keep the humidity and temperatures in your tank at optimal levels, especially during winter, as these are not native snails. They thrive best at temperatures around 20 to 25 degrees Celsius. Should you find them hiding in their shell and refusing to come out, it may be that the environment around them isn?t the best. Check that it?s not too dry or too soggy and that it?s neither too hot or cold for them.

Giant African land snails aren?t very picky eaters, and they?ll eat most kinds of vegetarian food. Lettuce and cucumbers are a good start, and so are apples, bananas, zucchini and bell peppers. Keep an eye on the food and take them out once they brown and start to wilt, as they can rot in the dish and make your pet ill. Remember not to give them anything with salt or excessive starch in it.

Another point to take note of is that even though it is legal to keep a giant African land snail in the UK, they are nevertheless considered an invasive species. That means they are not allowed to be released into the wild in the UK, so if you find snail eggs that you do not wish to keep, they should be disposed of properly.

If you?re looking for an interesting and exotic pet, you could certainly do worse than a giant snail.

Keeping Other Fish with Koi Carp 9835