Rabbits like to have?a?home where they can eat, sleep and chill out. This?is the same for rabbits living in the wild and for pet rabbits. But where are these homes and what are they like? Where do rabbits live??

Where do rabbits live? Read on to find out…

Where do rabbits live in the wild?

Humans have introduced the?best known species of rabbit – the European rabbit – to every continent except Antarctica. All around the world rabbits can be found living in the wild, being kept as pets, and being bred for food.

Rabbits live in a wide range of environments, from?woods?and meadows, to grasslands?and forests, deserts and wetlands.?Over half of all rabbits live in North America.?They are also native to southwestern Europe, Southeast Asia, parts of Africa and South America.

Where?do rabbits live in groups? What are their homes like?

A colony of rabbits will make their home wherever?it is easy to dig a?hole, known as a burrow.

Burrows are linked?to nesting areas by a range of tunnels. This linked habitat is called a?warren.

Wild rabbit warrens can be really large and can descend as much as three metres underground. There are several entrances to the warren, as well as several emergency tunnels and exits?in case the rabbits need to exit the warren in a hurry.

If you could look inside a rabbit warren you would notice that it is very clean. Rabbits only drop soft pellets which they re-digest in their home. The other hard pellets are all dropped outdoors.

Rabbits find their food outside the warren. They eat close to the warren which is why you may notice that the vegetation is shorter in that area. Rabbits are prey animals and eating close to home makes it easier for them to escape into the warren should any predators appear on the scene.

The threat of predators?is also the reason why rabbits are crepuscular animals. This means that they tend to be awake and active early in the morning and in the evening, as in the wild these are safer times of day for them to be out looking for food. That is not to say that you won?t sometimes see a rabbit out in the open in the middle of the day, if the weather is sunny and the area is secluded.

Where do rabbits live as pets?

There are two main places?where rabbits live when kept as pets:

Keeping rabbits in a hutch

If you are?going to keep rabbits?outside in a hutch then it?s a good idea to keep a pair rather than just one rabbit on its own. Rabbits are social animals and they will get lonely if left by themselves.

In the UK, the minimum size hutch that is suitable for a rabbit is 6? x 2? x 2?; this is according to the Animal Welfare Act. The Act also states that an 8? x 4? x 4? run should be attached to the hutch. If you have a very large rabbit – or more than one -?then you will of course need even more space.

If your rabbit is living outside it?s also worth remembering that they should be fully protected from potential predators.

If you decide to just have one rabbit then you need to be prepared to give it all of the attention and companionship it needs. A good way of doing this is to keep your rabbit in your home with you. Keeping a house rabbit is far more common now than it used to be.

Here are some points to remember if you are thinking of having a house rabbit.

Whether in the wild or in the family home, rabbits are sociable and playful. They need a home that is secure and that includes space for them to be alone if they choose to be.

Where do rabbits live in mythology?

When you asked “where do rabbits live?”, we’re willing to bet you didn’t expect this answer! Here’s a fun fact to end our article on where rabbits live…

In Korean and Japanese tradition, rabbits actually live… on the moon!

furry
Previous Article“Rabbits for Sale!”: A guide to buying rabbitsNext ArticleTypes of Rabbits 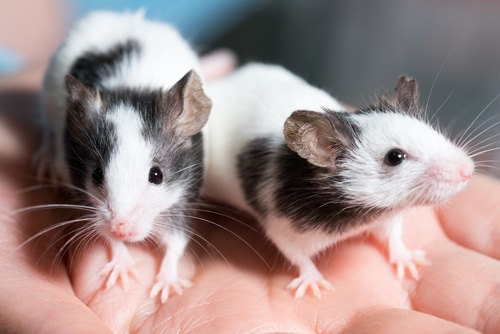 Rats have been given a bad name by decades of bad press. Far from the dirty, disease-filled pests that are portrayed on our screens, these sociable, clean animals have a few surprising perks to owning them.

These sociable, friendly pets are highly trainable animals who show affection for their owners and have many cute little quirks that make them great companions. They also have a very strange way of showing they?re happy!

With that in mind, here are three surprising behaviours of pet rats.

1. They are incredibly playful animals

This one will be no surprise to those who will have seen the boxing, chasing and excited jumps with their own eyes, but many are unaware that rats spend lots of time playing with each other and their owners. One scientific study actually showed that rats giggle when they are tickled. It?s highly recommended that you fill your pet rat’s cage with lots of enrichment toys and interact with them daily. Many owners report that their pet rats love being chased or to wrestle their hands!

2. They are incredibly social animals and love to show affection

Rats are incredibly social creatures. While of course every animal has its own personality and there are exceptions to the rule, they need to live with at least one other rat and most enjoy lots of daily interaction with their owners. It is not a rare sight to see pet rats snuggled up in the laps, pockets and sleeves of their humans. They will also nibble and lick them, as they would other rats, in a show of affection.

3. They boggle their eyes when they are happy

Surprising when first witnessed, one of the most peculiar aspects of rats is the way they display their contentment. While cats purr and dogs wag their tails, when a rat is very happy or relaxed they will brux and boggle – which is a sort of teeth grinding and very fast bulging of the eyes.

Rats are brilliant pets for all ages and there are many positives that come from owning these friendly, misunderstood animals. 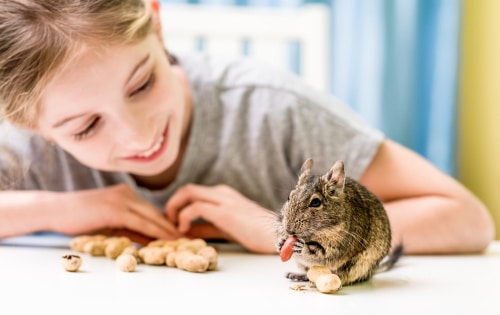 When they?re living in the wild, degus focus on dietary fibre. It makes up about 60% of their diet, with the other 40% consisting of natural vegetation. But when they?re kept as pets, you?ll need to keep a close eye on what you feed your degu.

For the most part, your degu?s diet should consist of good quality hay. There are lots of brands that will suffice, but two of particularly good quality are Timothy Hay and Meadow Hay. Keep an eye on the colour: if it?s pink or white, you should throw this hay away as it?s growing mould. If it?s green, it can cause bloating. Occasionally, you can mix some Alfalfa hay in with your regular hay. It?s high in protein, so great in small doses.

You can top up your degu?s bowl with a little bit of guinea pig or degu-specific food, but don?t go overboard. It?s important that your degu doesn?t start ignoring the hay because it?s got a range of health benefits, including the maintenance of a healthy gut and strong teeth. Around 10g of degu food a day should do the trick.

The good news is you can feed your degu some of your human food! Give them to your degu in moderation though, as they can cause gas and bloating. On rotation, you can feed them the following foods around once or twice a week:

Some sugary foods can be an occasional treat for your degu. In excess, they carry the risk of diabetes, so we?d only recommend doing this once a month.

When it?s treat time for your degu, give them a tiny amount (one or two) of:

As a general rule, the main thing to avoid giving your degu is fruit not listed here, rabbit food, hamster food or anything with molasses.

Just like us, degus love food ? whether it?s good or bad for them. Bookmark this page to make sure you give your degu a balanced diet, and happy feeding!

Learn more about caring for your degu and other pet care advice here: https://nichepets.com/category/mammals/degus/

Keeping Other Fish with Koi Carp 9673